I have been quoted on saying we are most vulnerable when we are naked, and never is it more true than in a romance novel. As a writer, I can do deeper into a characters psyche, motivations, and potential conflicts when I've put them skin to skin with another person. Will they reveal truths to their partner they never have before, or will they hide their true nature? Was their world changed forever? I want to know.

Now the explicitness of how that part of the character's journey is told will vary by taste, but for me, the love scenes are vitally important, no matter how hot they are portrayed. The characters will either grow closer together or be driven apart. How can that not be exciting?

When an author has done their job well, the reader will see beyond the titillation to what is going on beneath the surface. The connection the two characters are making, and that is a beautiful thing.
Contributed by Anna Alexander
Award winning author Anna Alexander is the author of the Heroes of Saturn and the Sprawling A Ranch series. With Hugh Jackman’s abs and Christopher Reeve’s blue eyes as inspiration, she loves spinning tales of superheroes finding love. Anna also loves to give back and has served on the board for the Greater Seattle Romance Writers of America as chapter president and on the committee for the Emerald City Writers Conference. 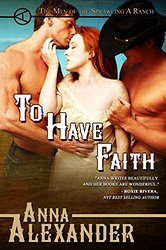 To Have Faith
Ben Castillo was every woman’s fantasy. More precisely, Faith O’Leary’s fantasy. Tall, broad, oh-so handsome, and the best part of all – he was just as kinky as the rumors suggested. Even kinkier. When he agreed to help Faith explore her submissive nature, she mistakenly thought her biggest obstacle would be in getting Ben to believe her when she said she wasn’t going to walk away after his tutelage was over. Instead she finds herself facing the scorn of their conservative community when it’s discovered that their relationship also included time spent with his cute roommate Colby.

Ben was convinced his time with Faith was limited, and the vicious gossip going around town is a sign for him to walk away from the woman he’s come to love, but Colby thinks Ben’s a fool, and will do whatever he can to ensure a happy ending. For all of them.

When an arrangement becomes more, the ranch takes the heat when the town finds out about their illicit affair...      Amazon BUY LINK


“Little girl, you don’t know what you’re doing.”
“What do you think I’m doing? And I’m not a little girl. I’m thirty. I’ve been around the block a few times.”
“Have you?” He rose to his feet, all six-foot-four of him, and towered over her. The little shop shrunk even more around them as he filled every corner with his sex appeal. “I think you’re trying to entice an older, stronger man to have his way with you.”
So he had been picking up on her vibe.
If he had appeared angry or disinterested in any way, she’d lie and tell him he was imagining things. But if that light in his eyes was what she hoped it was, now was not the time to back down. “As I said before, I find you very intriguing.”
His brow furrowed. “What do you want, Faith?”
Ooo. Her gut tightened. That’s it. Just cut right to the chase.
She drew in a breath, hoping to hell she didn’t pass out from the nerves, and voiced her secret wish. “I want you to teach me what you know.”
He stilled and then cocked his head to the side. “Know about what?” he asked slowly.
“About being a submissive.”
He sucked a breath in through his teeth and rocked back on his heels. “What makes you say that? What have you heard?”
She licked at her lips. “That cattle aren’t the only thing you rope. That you’re a Dom.”