It's Retweet Day for MFRW on Twitter. All Marketing for Romance Writers are invited to set up tweets for their books.

Once the tweet has been posted, click anywhere in the white background of the tweet. This will open it and allow you to highlight and copy the URL.

Retweet Day is on the second Wednesday of each month. Retweet everyone on the list who uses one of the hashtags.

HINT:
To help people find your tweet, click the the white background and then the down arrow (found on the right side). Choose "Pin to Your Profile Page." This will keep the tweet at the top of your Twitter feed so more people can find it.

1. Must have #MFRWauthor or #MFRWorg in the tweet. (This retweet day is to promote each other and our group.)
2. Do not use profanity or sexual explicit graphics. Keep it for all age groups.
3. Please do not use adult topics.
4. Limit hashtags to three (3) per post.
5. Return on Retweet Day and click each link in the comments.**
6. Click the heart on the tweet and then the retweet symbol and the Retweet button.

** To share a tweet, highlight the url, right click, and you will see an option to open the link or go to the url. Do that, and it should open in a new window and take you there.

Here's to a great day of retweets!

Kayelle Allen writes Sci Fi with misbehaving robots, mythic heroes, role playing immortal gamers, and warriors who purr. She is the author of multiple books, novellas, and short stories. She's also a US Navy veteran and has been married so long she's tenured.

I try to create complex heroes, and one thing that helps is creating strong character arcs. For deeper understanding, I recommend reading Character Arcs by KM Weiland. That book gave me great insights into my characters. This post uses he/she. Feel free to apply your preferred gender pronouns. 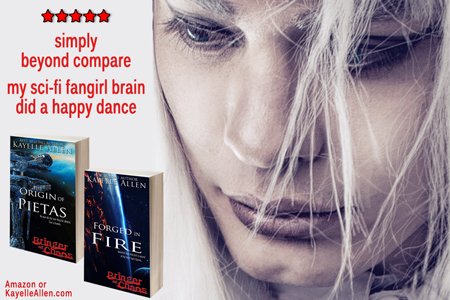 The main character must face conflict, deal with emotions, and experience change. All those things arise out of the following five aspects.

What does your hero want?

If your hero lives a great life, with all he or she wants and no real needs, then there is no conflict. You must have conflict in order to move the story forward. Your hero should want something badly enough to change in order to get it. That want will be a major driver of your story.

What are your hero's personal preconceptions?

When your hero looks in the mirror, who is looking back? Chances are, he/she is already a hero to someone. But how does he feel about himself? When he looks in the mirror, does he see his failures? Or perhaps he sees himself as a hero when others see him in an entirely different light.

What does your hero do wrong?

Sure, no one's perfect, but the personal flaws facing your hero must provide a reason for your character to change and must be a lynchpin in driving that change. Example: a young woman with reasons in her past that make her distrust people in general, and men in particular meets a man who makes her long to trust. But because of her flaws, her misconceptions and inhibitions, she can't. She must overcome those flaws in order to find love -- to reach her goal.

What abilities does your hero possess?

The hero in any story will need to accomplish certain tasks. It might be anything from scaling a wall to performing before a crowd, but he needs to complete them in order to overcome the conflict and reach his goal. When the story opens, he can't do them, but by the end, he can. Not only has he changed the story, the story has changed him.

What scares your hero?

I have an immortal king in multiple stories. Pietas can come back from almost any death. He's nearly 2000 years old and is as big and brave as they come. But because he's isolated himself by virtue of his position as well as personal choice, he's never needed friends and never wanted one. The problem is, he's made one who's the target of assassins--and mortal. Now that he's had a friend, how can he face eternity alone? For the first time in his long, barren existence, Pietas fears the very isolation he has spent his life cultivating, and he will do absolutely anything to prevent it.
The point of scaring your hero is that if your hero is afraid, it means the stakes are high enough to make him change. If you create a hero who undergoes change, you create a complex character.

Ask yourself if you have developed a hero who has tangible wants and needs, preconceptions that don't necessarily match his reality, faults that make him relatable, and the ability to adapt and learn new skills. Don't forget to give him one or more fears that he must overcome or remove. A layered approach to creating your hero will hook your readers and bring them back for more.
---
Bringer of Chaos: Origin of Pietas
An immortal king must doom his people to exile or place his faith in that which he most hates: a human.
Bringer of Chaos: Forged in Fire
An exiled, immortal king, a ginormous panther "kitty" and the most dysfunctional family since forever.
Kayelle Allen writes Sci Fi with misbehaving robots, mythic heroes, role playing immortal gamers, and warriors who purr. She's also a US Navy veteran and has been married so long she's tenured.
https://kayelleallen.com