For this month's Retweet Day on Twitter, we'd like to invite all Marketing for Romance Writers to set up tweets for their books.

Remember to visit the blog on June 8 and retweet everyone on the list.


Also in an effort to help people find tweets to share of yours, click the ...(three dots) again and pin your tweet to your profile page. This will give you a count of how many people retweeted your post.

1. Have #MFRWauthor or #MFRW_org in the tweet. (This retweet day is to promote each other and our group.)

2. Do not use profanity or sexual explicit graphics. Keep it clean for all age groups.


Here's to a great day of retweets,

Wordy Phrases and How to Find Them #MFRWauthor #amediting @kayelleallen

I'm going to wear my editor hat today and share tips I use on finding words that don't work as hard as you want them to. Every writer has pet phrases used to get the story from the head to the screen (or paper) such as "she rolled her eyes" or "he wet his lips." Some phrases are clichés; others are stock fillers we use while we're developing a scene. We figure we'll edit them later.
The problem is, we forget they're there. They become part of the background noise, and we fail to see them. Sometimes, even helpful words can slow down our writing, and take away the punch of a well-written sentence. How do we find them when they become invisible because we've seen them too often?
One good way is to use a program like SmartEdit. This software provides things such as an adverb list, repeated phrases, words, and usage of clichés. It shows dialogue tags and more. The Author's Secret is not affiliated with them, but I recently found this program myself and feel it's tightened up and strengthened my writing. I recommend it.
While a program is helpful, a simple list of your own no-no words will come in handy. I compiled a list of oft-used phrases that author friends report are their crutch words. Some of them are mine too. Here's the list.

Substitute gender pronouns (his/her, etc.) when searching.
Whatever you write, don't forget to run a spell check, and have a peer check your work. A good editor can help you find and eliminate crutch words, and suggest precise language, but your own experience and attention to detail can make their job easier, and save you money in editing fees.
Do you have a list of your own? Feel free to tell us about it in the comments. If you've found this post helpful, please share it on your social media.
--- 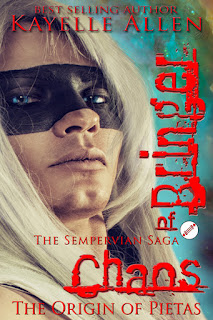 Bringer of Chaos: the Origin of Pietas
YA (older young adult), action adventure, science fiction, military science fiction, genetic engineering, space opera, space marineHeat level: Mainstream
Download the first full chapter.
Two enemy warriors: one human, one immortal. Different in belief, alike in spirit, marooned together on an alien world.
Imprisoned and in isolation over a year without food or water, the immortal Pietas survives. Though broken in body, his intellect and will are intact, thanks to Six, the special ops warrior who captured him, but kept him sane. The warrior had no hand in his deprivation and, like Pietas, was betrayed by his own kind. When Pietas is abandoned on an alien world with nothing but his honor--and Six--he must find and rejoin other immortal exiles. After centuries of war, Pietas detests humans and kills them on sight, but he is too damaged to continue on his own. Though he despises needing help, he allows Six to nurture and restore him to full strength, and then accompany him. As they cross the planet together on foot, the immortal begins to wonder if he has found his first human friend, or if Six is loyal only because Pietas could keep the others from tearing him to shreds. This human will either be his closest living friend, or the one whose betrayal will trigger all-out vengeance by the most powerful immortal ever born.
Immortal. Warrior. Outcasts. Traitors took everything. Except their honor.
---
Amazon http://amzn.to/1R8DAbb
Amazon print http://amzn.to/1SSmueB
CreateSpace http://bit.ly/boc-origin-cspGoodreads http://bit.ly/boc1-good
---
Follow Kayelle Allen's Amazon Author Page and get one alert from Amazon when a new book is available. Sign up for AuthorAlarms and the app will send you one email when Kayelle releases a new book. You can add and remove authors at any time.
No comments: