Fall Again: Beginnings is the first book in the Fall Again Series. My original plan had been to write a short story entitled Time for Coffee. In this story, two actors who have not seen each other in years meet as they're both leaving an audition.(These characters would eventually become Marc & Lauren in the Fall Again Series). Both are short on time, but decide that they do have time for coffee. Over the next hour they discuss their lives, careers and eventually why things could never work romantically between them.

The problem was that I am the queen of procrastination. By the time I finally started to write, I had too many ideas to write this story as a short story. That's when I decided to write a stand alone novel.  The novel eventually grew into a series.

My story is set in the world of working actors. I naturally drew from my own experiences in the industry (I began working professionally as an actor while still in college) and from the experiences of other working actors. We work in a profession that is often misunderstood. I wanted to present a realistic glimpse into the lives of hard working artists as opposed to glamorous celebrities.

But this is also a Romantic novel. Shortly before I began writing I went to a girls night where the conversation turned to the subjects of first loves and the"" one who got away"". Several women on this night wondered what would have happened if they had met someone from their past at a different time in their lives.

Not long after this girls night, I began writing to the theme: what if you met the perfect person- your best friend, your soul-mate and the great love of your life…but at the wrong time?

As a hopeless romantic, I love the idea of a good love story and can see myself writing more romance projects in the future. However I am open to writing in other fictional genres. Last year I completed a first draft of a novel about a family funeral. The novel explores the humorous aspects of an event that most of us will go through at least a few times in our lives.

I love writing because their are no limits and you can go as far as your imagination will take you. At this point my own imagination is an endless sea of possibilities.

Contributed by Donna Figueroa
Donna Figueroa is an actor living and working in Los Angeles CA where she has worked on stage and on the big and small screens. Her credits include several television commercials and voiceovers for animation, commercials and industrial projects. She is a graduate of Emerson College in Boston MA where she majored in Dramatic Arts and Speech.

Donna is a producer and performer at Story Salon, Los Angeles's longest running storytelling venue where she has developed and performed three one person shows.

What if you met the perfect person- your best friend, soul mate and the great love of your life. But 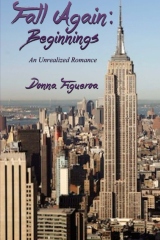 what if you met this person at the wrong time?

This is the question is at the heart of the Fall Again, a romantic series about two working actors The story takes place in New York, LA and places in between over two decades.
In Beginnings, Marc and Lauren meet in New York City when they are young and starting to build careers. While there’s an obvious attraction, decorum dictates that their relationship remain within the boundaries of a platonic friendship.

Over time, Marc and Lauren will struggle to maintain the façade of friendship to their closest friends and to each other which will become increasingly difficult.  Despite their best efforts to remain friends, they fall in love…and the consequences will change the course of their lives for years.

REVIEW
""This is not a modern romance novel, it is something more - a love story. A love story that weaves us into the lives of the characters until we don't want to leave their world, a love story that engages us to cry at their fictional pain and laugh at their triumphs."" - Amazon Review


He heard her quick footsteps coming up the three flights of stairs before she finally came into view on the landing at the bottom of last flight of stairs.
As Lauren Phillips turned the corner she looked up at Marc and stopped, seeming surprised. “Marc?”
Marc responded as he took notice of the striking woman at the bottom of the stairs. “Yeah.”
An expression of pleasant recognition crossed her face. “Oh my God… Marc Guiro! I didn’t realize that Mel’s friend Marc… was you!” She confidently bounded up the last flight of stairs seeming   very happy to see him.
But Marc was confused. This girl appeared to know him, but as far as he knew he had never laid eyes on her.
Lauren quickly realized this. “I’m Lauren Phillips. I went to NYU and we lived in Weisman Hall at the same time the last two years you were in school. We were in different towers but I saw you in the cafeteria and in the laundry room from time to time. You were two years ahead of me… but we were in a dance class together one semester.”
Marc looked at her closely. “I only took two dance classes while I was at NYU.” He continued to look at her blankly.
Lauren tried not to take this personally and attempted to play off the situation with humor. “Well whichever class you’re thinking of now… I was probably in the other one.”
Lauren flashed a cool controlled smile at Marc as Mel came into the hallway.
“Lauren…you made it!”
Lauren ran to her roommate giving her a big hug. “Thank you for today! It was wonderful!”
Mel didn’t want to take credit for booking Lauren on her show. Casting liked her look and personality. All she had done was to deliver Lauren’s photograph and resume to the Clayton’s Crossing’s casting department. “No, Lauren that was all you. I just gave casting your photograph. Once they called you in for your interview I was out of it.”
Lauren was suddenly aware that she was ignoring Marc and looked back towards him.
“Mel got me a day of background work on Clayton’s Crossing today!” Her excitement was getting the best of her.
“So I’ve heard. That’s great! Why don’t you both come inside?”
Marc ushered them both into the apartment while still questioning  himself. Had he ever met this girl? He would have remembered.
Lauren was attractive. She had deep set dark brown eyes and dark hair which she was wearing pulled back into a perfect lose ponytail. He could see that she was wearing a lot of makeup, but she would be after a day on set. The makeup only enhanced her high cheekbones and smooth skin. She was dressed nicely in a gauzy long Indian skirt and blouse that she wore belted which showed off a tiny waist. She was slender. Over her shoulder she carried a large tobacco colored leather satchel.
But Marc found himself looking beyond her physical appearance. She had what some might call a sparkling personality, not to mention a bright and wonderful smile. Lauren’s energy was contagious. When she came up the last flight of steps toward him, it was as if someone had turned on an incredibly bright light.