Do Books on Writing Help?
From someone who entered a creative writing course with illusions of muses and inspiration as essential elements to writing, I've become a believer of perseverance and good old hard work instead.

I understand now, the importance of structure and form, and that writing is an art that improves with practice not with longing. The more I read about the craft of writing, the more familiar I become with concepts that seemed mysterious and confusing at first but gradually become less so because I practice them. I appreciate more and more how much self-discipline and self-critique goes into creating a work of passion. 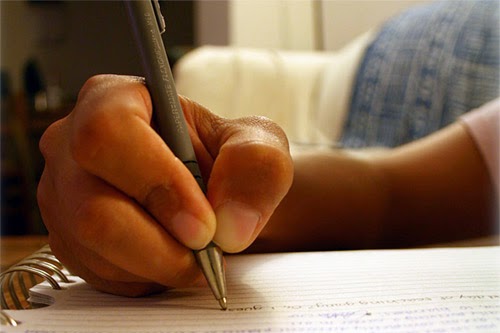 Which brings me back to my original question, do books on writing help? More often than not, I'd say they do in a colossal way. Albeit I’ve read several that felt like a total waste of time to me, there were those that will be forever on my nightstand. Like Margaret Atwood’s Negotiating with the Dead; Dorothea Brande's Being a Writer, Henry James's Notebooks. Schopenhauer’s essay, ‘On Style’, and White and Strunk's Elemants of Style are mini-bibles on writing. Edith Wharton, Ursula Le Guinn, and E. M. Forster, David Lodge, all have valuable advice from which I continue to benefit.

The very first change that these books engender in one is of attitude, I think. They teaches you to be less precious about your writing and the process of writing. You realize that the ease with which the words flow on the page of your favourite writer isn’t because she’s a natural genius, but because she worked, re-drafted, edited and crafted her words in a way that made them flow on the page, and that is her genius. There is a definite shift in the POV—one's own—and you learn to balance criticism and your own judgment of your work. This is imperative. This balance must be learnt and maintained at all times.

Though books on writing offer much, half the time there’s contradictory advice, and then what is a cardinal rule for one writer may be considered utter nonsense by another. And so the bigger question of whether 'it' can be taught arises. 'It' being the art of creative writing.

My belief in books on writing has sustained because there are still things like the ‘voice’ that teachers and writers on writing fail to explain and define. The fact that there is something that is elusive and individual, re-establishes for me, the wonders of what CAN actually be taught.

Of course, there are many who are unable to teach, perhaps because they themselves don’t understand the mysteries of the craft, or because they want to keep the ‘ivory tower’ and the I-am-a-writer-bow-down-to-me concept alive. Taking the analogy from Dorothea Brande, if music and painting can be taught, and we can have Picasso and Matisse, Monet and Van Gogh, perhaps writers too should stop feeling threatened by each other, and freely accept that some parts of their craft is teachable and somewhat transferable to at least some.

There are so many different kinds of genres. It isn't a verbal universe any more, but a verbal multi-verse. It is a multi-cultural, multi-lingual, pluralistic world out there.


Embrace it. Celebrate it.

CONTRIBUTED by Zeenat Mahal
Zeenat has published two ebooks with Indireads in 2013 and She Loves Me, He Loves Me Not is her third novel. The Contract was an Indireads bestseller.