Where Do Story Ideas Come From? ASK #MFRWauthor @SaschaIllyvich

The idea for SLOW BURN came from me playing "what if" while watching Burn Notice. About that time, I discovered the metal band Devildriver.  Loving their groove metal sound, I wondered about a female version of the same sort of band, and what that'd look like if she had magical powers and had to be protected. Sonja and Derrick were born of Dez from Devildriver and Michael Westen from Burn Notice!

I am the author of over 52 published titles throughout sixteen years of my career.  While I possess talent, I've been lucky since day one and I remember that lesson every day. 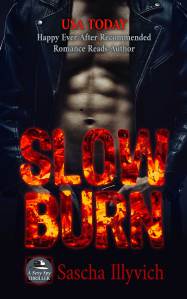 Tempting secrets of an angel
Seductive mysteries of the beast

Derrick, a former spy, has been asked to protect the sultry Sonja, a death metal singer whose magical voice grabs him by the balls and won’t let go. He’ll protect her, all right…with every part of his body tight against hers.

Sonja uses her voice to purge her fans of their darkness, their hate and hopelessness. But evil forces want to use her magic for their own ends. All she wants, at this point, is safety for herself and her band.

When Derrick and Sonja team up, Sonja does her best to resist the lure of safety he represents, until a radical league that wants her dead propels her into his arms. Will his help be enough? Or will she lose her heart to him, only to be killed in the process of saving the world?


Tears streamed down her face.
He wanted to kiss them away.
She opened her mouth and screamed; power flowing out from her in a torrential force that clued him in to just how terrified the images were that she saw.
Then he saw them, the faces of the sad, the lonely, the angry, those who had taken their lives. He'd seen a very brief glimpse of the men who captured her, then his mind went fuzzy. Quickly stilling his mind, he leaned over her and did the one thing he could think of to distract her from whatever horrors raced through her head.
He kissed her, muffling her cries.
She sobbed but gave herself openly to the kiss. The power flowing from her stilled, calmness now settled around them. She still shook, her body convulsing in his arms while she tried to flail this way and that, turning from him with such force he had to use his puma strength to overpower her and force her back to the kiss.
Somewhere in that haze of their mingling tongues, the air changed again, this time the scents of terror and agony fading to give way to something dark, yet sensual. Derrick tasted her, pressing against the sweet plumpness of her mouth against his. Eyes open, he gave her hand a light squeeze.
She settled, blinked and looked at him through her wild gaze until her breathing slowed and she seemed to return to the here and now. Sonja shifted against him. She reached for his face, lithe fingers stroked along his chin.
He hardened instantly at her touch. Careful to steady his reaction against rising hormones, Derrick moved, feeling the softness of her breasts beneath his jacket. ""You're still wearing my coat,"" he licked her chin, then bit her neck.
The tears stopped, and she sniffled. Sonja laughed and kissed him back, taking his face in her hands while she slid beneath him. ""It fits. Perfectly in fact. I think I'll keep it.""