#MFRWauthor Richard Brawer Shares His Experience As A Writer #amwriting

My experience might help you.
You can read books about writing, but I think the best thing you can do is read books by major authors. Once you have decided you want to write, while you read you will analyze how the authors create characters, scenes and conflicts.

Don't give up. Writing requires perseverance and practice, practice, practice. My first couple of books were not widely received. But I kept on and now I have an historical fiction novel praised by experts and recommended for students of the era. i also have a suspense novel with 71 reviews on amazon.Writing like everything else comes from doing. If you are thinking of

Find a critique group that will give you honest feedback on character development, dialogue, voice, plot, conflict and setting.  But don’t automatically take anyone’s critique as gospel.  Remember, it’s your story.  Analyze the critiques to see if they have merit.  Say you have a six person group.  If one person criticizes something then it may or may not be valid.  But if three or four in the group say the same thing about a segment then you should take it under serious consideration.

Have a lawyer go over your contract. If you or he finds something you don’t like try to get it changed. If the publisher or agent will not change that section, then you have two choices, sign or pass.

Hire an editor, or the very least, a proof reader. It is difficult for the author to proof read his own book. He knows it too well and will begin skimming.

Post written by MFRW Author Richard Brawer
Richard Brawer writes mystery, suspense and historical fiction novels. When not writing, he spends his time exploring local history.  He has two married daughters and lives in New Jersey with his wife. You can connect with him at his author website here: www.silklegacy.com. 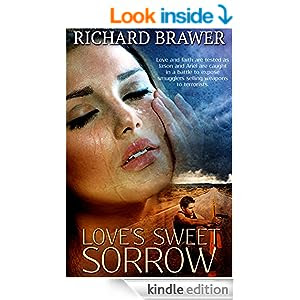 Richard's latest release is Love's Sweet Sorrow, a Mainstream Romantic Suspense with Vinspire Publishing.
It is said opposites attract. There can’t be two people more opposite than Ariel and Jason. Ariel is a traditional Quaker with an absolute aversion to war. Jason is the lead council for America's largest weapons manufacturer.

Their budding romance is thrown into turmoil when Jason uncovers evidence linking his employer to international arms deals that could devastate America. His determination to stop the treason puts Ariel in the middle of dangerous territory.

The kidnappings, killings and harrowing escapes from those trying to retrieve the evidence force Jason and Ariel to delve deeply into their often opposing long-held convictions, and question if they are truly meant to be together.